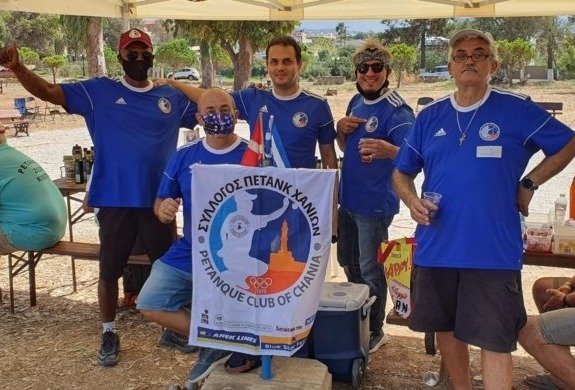 From a couple of work colleagues playing their favourite sport during their lunch breaks Petanque in Crete has grown to into a club of around 50 members with an International reputation for it’s Summer Tournament which attracts players from around the World”.

In 2009 Dr. Louk Andrianos from Madagascar and Frenchman Professor Jacques Zaffran  were work colleagues at the Orthodox Academy of Crete (OAC) in Kolympari. but it was not until Louk  noticed a set of Boule in Jacques car that they started to play boule together and Louk’s vision for a Petanque Club on Crete began to take shape.

In Louk’s native country, Madagascar, Petanque was a popular sport and many other Francophile countries also share a passion for Petanque but on Crete the game was unknown. For Louk the creation of a club on the island to promote the sport became a driving ambition, his aim was to introduce Petanque to a new generation of players and to share his love of the game with his friends on Crete.

With Louk’s enthusiasm an initial group of six players soon became 15 and the embryonic club began to meet regularly in Kolympari, in the grounds of the Orthodox Academy of Crete and at the beautiful Aghious Apostolous Park, a venue that was to become the club’s permanent home.

Initially it was just family, friends and visitors from Petanque playing nations who became Louk and Jacques playing partners but in 2011 following publicity for the sport (a call for an acquaintance meeting at the OAC in Kolympari) in the local newspaper “Haniotika Nea”, Petanque began to attract a new generation of enthusiastic Greek players, with more local sportsman ready to take up the responsibility of building a Crete Petanque club. Six other people shared Louk’s dream for a club to promote Petanque on Crete and they (Louk Andrianos, Jacques Zafran, A. Fasolo, Christos Chatzichristodoulos, Antonis Glambedakis, and Ioannis. Papadimitrakis) became the founder members and the first directors of the embryonic club.

It took the founding members 3 years to raise the 650 Euros fee and recruit the 20 members necessary to register the club but in 2014 the first part of the founders ambitious dreams were realised when Chania Petanque became an officially recognised sporting club in Crete.

The year 2013 saw the launch of what was to become an annual competition, the first Chania Open Petanque Tournament, with the help of the municipality of Platanias and the Orthodox Academy of Crete. In 2015 the tournament attracted it’s first overseas competitors and has continued to grow in popularity each year. Now attracting teams from around the World, including Canada, Denmark, England, The Netherlands, Belgium, France, Mongolia, Russia, and Germany, the Chania Open Petanque Tournament has won a popular place on the international petanque calendar.

Developing the sport has always been a key mission and in 2017 with the help of Mr Ioannis Malandrakis, the mayor of the Municipality of Platanias, the club hosted (in Maleme) its first training seminar for umpires led by renowned French trainer Alain Julia.

The same year also saw the club’s first participation at International level when a team of four, Louk Andrianos, Antonis Glampedakis, Giannis Andrianos and Selina Andrianou, travelled to Marathon, Attica. The following year a three man team, Louk, Antonis and George Iguanas made the journey to Toulouse, France to compete in the Educantes Tournament returning with the club’s first International silverware.

The year 2019 marked another landmark for the club with a 5-man team of Louk Andrianos, Antonis Glampedakis, George Iguanas Chatzisotirakis, Giannis Apostolakis, and Nikos Psaroudakis, travelling to Bulgaria to compete in the European Championship.

What began as one man’s passion has grown to become an internationally recognised club with approaching 50 members and sponsorship from prestige companies including ANEK Lines and Blue Star Ferries, Terra Creta, NEA Television, The Botanical Gardens of Crete, Haniotika Nea Newspaper and the Italian Petanque equipment manufacturer Boulenciel.

In 2020 with support from Municipality of Chania the club constructed the first permanent Petanque playing arena in the grounds of the beautiful Aghious Apostolous Park, the arena has seven individual playing strips along with seats and tables for spectators.

The club meets almost daily but mostly on Tuesday and Thursday afternoons and at weekend afternoons, for training sessions and competitions. Newcomers are welcome to come along any time to get a taste for this fascinating game. For those wishing to take up the sport club membership costs just 20 Euros per year.